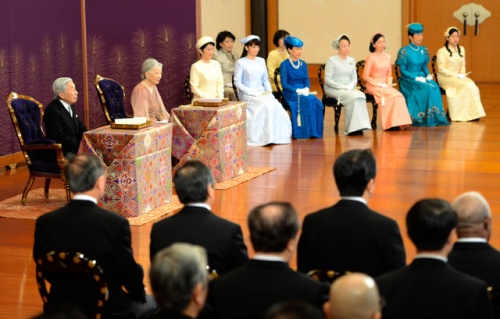 On 14th January, the members of Imperial Family attended the Ceremony of the Utakai Hajime (Imperial New Year’s Poetry Reading) took place at Imperial Palace. This is a ceremony to read a collection of poems on a common theme to a wider audience. This Year’s Theme was “Person”.

His Majesty the Emperor

(English)
In fierce battles there
Countless persons lost their lives
I now see the isle
Across and beyond the sea
Lying so green and serene.

(Background of the poem)
Their Majesties the Emperor and the Empress visited the Republic of Palau in April 2015 to pay Their respects to those who lost their lives there during World War II. They offered flowers at the Monument of the War Dead in the Western Pacific located on Peleliu Island, where fierce fighting took place between Japanese and American troops. Their Majesties also bowed Their heads towards Angaur, which They could see from there, a neighbouring island which was also the site of fierce battles.

Her Majesty the Empress

(English)
Towards the crimson cloud
A plane flies at sunset
I picture in my mind
A youth travelling alone
Like myself when I was young.

(Background of the poem)
Seeing the airplane flying across the sky towards the crimson-coloured cloud at sunset, Her Majesty the Empress imagines for a moment a young traveller who may be on that plane, just like Herself in Her young days, flying in the same kind of twilight sky, alone.

(Her Majesty, soon after Her graduation from university, attended a conference held in Belgium, and then travelled on Her own for 54 days in Europe and the United States.)

His Imperial Highness the Crown Prince

(English)
A small town in Spain resounded with a song, Expressing the people’s hopes for the reconstruction of Japan after the great earthquake.

(Background of the poem)
His Imperial Highness visited Spain in June, 2013. During his stay in the country, His Imperial Highness paid a visit to Vicente Neira Primary School in the city of Coria del Rio. On his arrival, the people of the city welcomed His Imperial Highness at the entrance of the school with a chorus of the Japanese song ‘Hana wa saku’ (‘Flowers Will Bloom’) which was written and composed with hopes for reconstruction after the Great East Japan Earthquake.
This poem depicts his impression on that occasion.

Her Imperial Highness the Crown Princess

(English)
So serene are the eyes of the young people As they talk about their hopes for the reconstruction of their hometown.

(Background of the poem)
In October last year, Their Imperial Highnesses the Crown Prince and the Crown Princess visited Fukushima Prefecture two years after their previous visit, to see the state of reconstruction in the region after the Great East Japan Earthquake. Their Imperial Highnesses paid a visit to the Futaba Future School, a prefectural high school founded to educate young people to promote regional revitalization and to contribute to society. Their Imperial Highnesses observed a group study session on how to solve community issues, and talked with the students.
This poem was composed to express the impression she had of the sincere looks of the students participating in the study session. 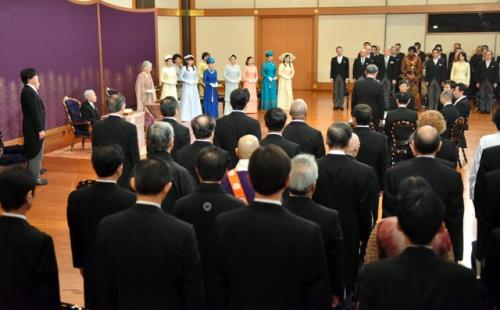 Photo from Asahi and NHK