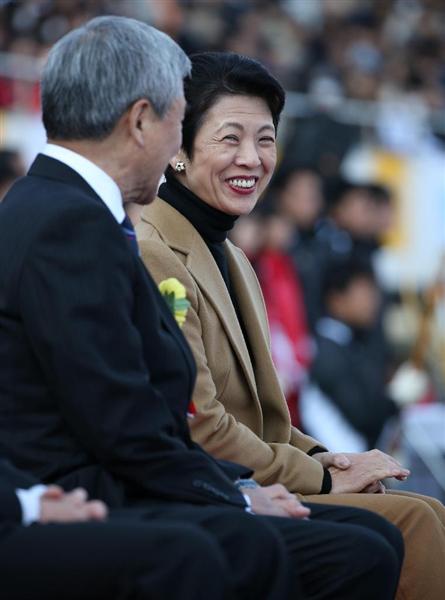 On 29th December, HIH Princess Kako of Akishino received Grand Cordon of the Order of the Precious Crown from HIM Emperor Akihito as an adult member of Imperial Family at Imperial Palace.

HIH Princess Kako wore robe décolleté and the tiara for the first time to met with Their Majesties Emperor and Empress. 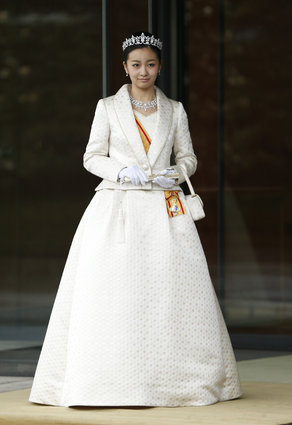 On the occasion of the birthday, HIH Princess Kako attended the Press Conference for the first time and answered questions at Akishinonomiya Residence. 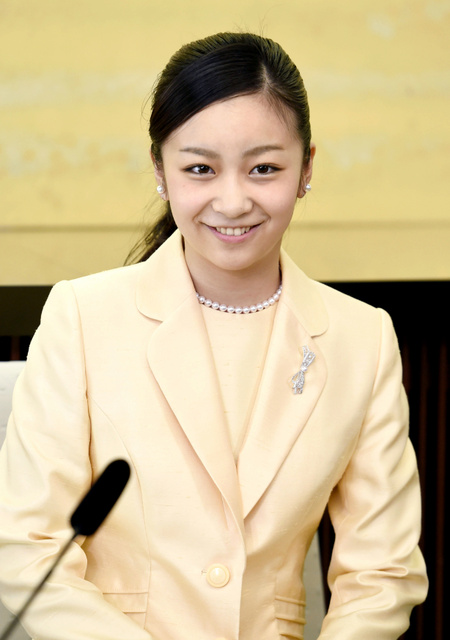 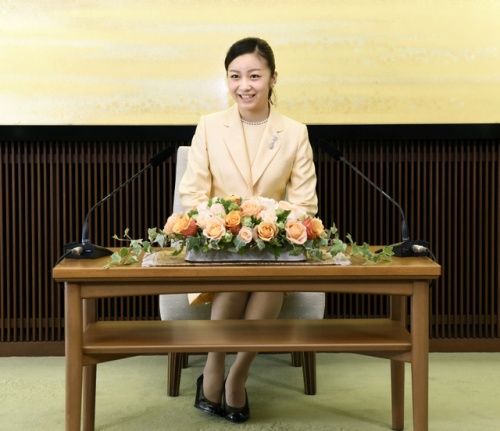 On the occasion of the birthday, Imperial Household Agency released some photos of HIH Princess Kako watching Imperial Treasures at Museum of the Imperial Collections inside Imperial Palace. 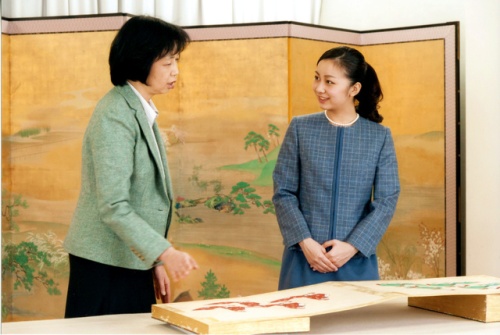 On 26th December, HIM Emperor Akihito attended the opening ceremony of the 188th Special Session of Diet. The session started on 24th December in response to the general election on 14th December.

On 24th December, HIM Emperor Akihito attended the Ceremony of Imperial Investiture for Prime Minister Shinzo Abe redisignated by the Diet and the Attestation Ceremony for the ministers of the Third Abe Cabinet took place at Imperial Palace. 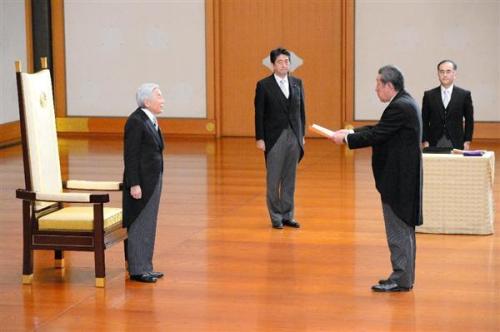 On 25th December, HIM Emperor Akihito attended the Attestation Ceremony for the vice ministers of the Third Abe Cabinet took place at Imperial Palace.

Celebration of the Emperor’s Birthday

On 23rd December, several ceremonies were held to celebrate the birthday of HIM Emperor Akihito at Imperial Palace. 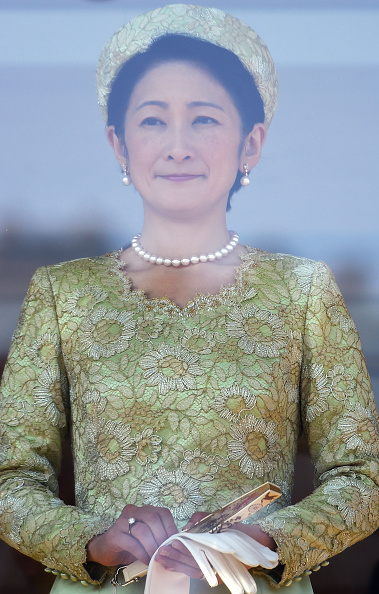 Photo from Asahi and Sankei 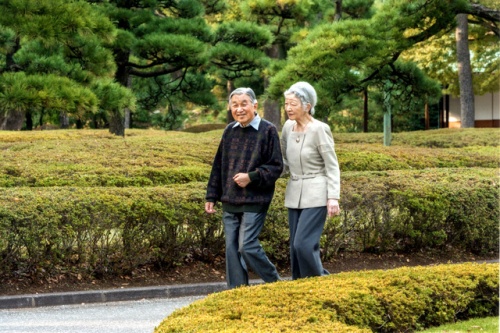 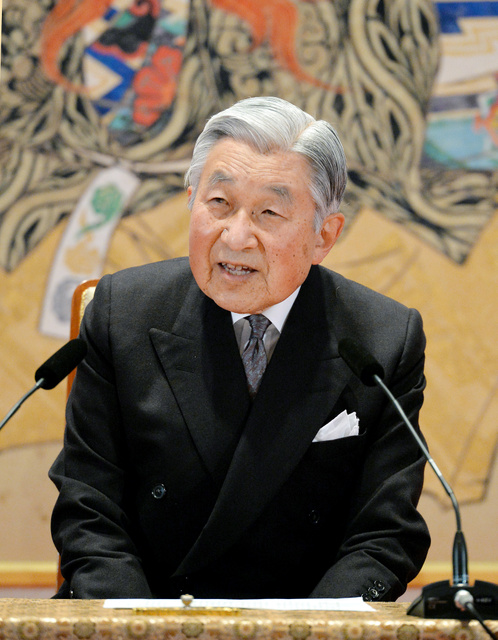 Question 1
In looking back on the last 12 months, would You tell us what are the events – be it current social conditions, Your official duties, or those relating to Your family – that have left the most impressions on You? Also, please share with us Your thoughts on the coming year. Next year marks the 70th anniversary of the end of World War II, and we hear that plans are being made for Your Majesties’ visit to Palau. May we ask you about your thoughts on the war and on peace?

Answer 1
Looking back over the past year, one of the events that have left a deep impression on me is the Nobel Prize in Physics awarded jointly to Dr. Isamu Akasaki, Dr. Hiroshi Amano, and Dr. Shuji Nakamura at the award ceremony recently held in Sweden. Dr. Akasaki and Dr. Amano worked together to develop blue light-emitting diodes, now called LEDs. Working separately, Dr. Nakamura achieved similar research results at around the same time and succeeded in promoting its practical application. Since blue LED lamps consume less energy and generate less heat, I believe they will continue to be applied in various fields of society. I am proud of the accomplishments of the three physicists and I would like to express my deep respect to them.

There were devastating natural disasters as well. In August, torrential rains hit the city of Hiroshima, and landslides triggered by the rain took 74 lives. We recently visited the affected areas, and the mere thought of being in the dark as trees were downed and large rocks came falling down with the mud was so terrifying. The fear that the people must have felt then is beyond my imagination. My heart goes out to those who had to endure this terror.

In September, the eruption of Mount Ontake left 63 people dead or still unaccounted for. It pains my heart to think that they were hikers enjoying the autumn foliage.

In November, an earthquake registering a lower 6 on the Japanese seismic intensity scale struck northern Nagano Prefecture. Fortunately, thanks to the routine drills carried out by the local residents and the cooperation of the firefighters, there were no deaths. Buildings were severely damaged, and I am deeply concerned about the hardships the people face as winter falls upon them. Still, I am glad there were no deaths in this earthquake.

Another issue that constantly weighs on my mind, although it is not of the sort that makes headlines, is the deaths of people in snow-related accidents in areas of heavy snowfall. Last winter, the number of snow-related deaths across Japan came to 95. This is greater than the death tolls from the heavy rains in Hiroshima or the eruption of Mount Ontake. I feel that, with advancing age, I am more prone to tripping and falling myself, so I am always worried about elderly people removing snow from the roof. It is my sincere hope that steps will be taken to give due care to elderly people engaging in rooftop chores so that the elderly can live safely even in snowy areas.

With regard to my family, Princess Kako, the younger daughter of Prince Akishino (His Majesty’s younger son), will start studying at International Christian University. She made the decision after hearing all about the university from her older sister Princess Mako, so I trust she will enjoy her college life there.

It was a great joy to us that Prince Mikasa, my uncle, reached hakuju, his 99th birthday, in good health. Meanwhile, Prince Katsura (Prince Mikasa’s son and His Majesty’s cousin), sadly passed away in June, and I deeply sympathize with Prince and Princess Mikasa for the sense of loss that they must be feeling.

More than 3 million Japanese people lost their lives during World War II. To ensure that those people did not die in vain, I believe it is our duty as survivors, as well as our responsibility to future generations, to always continue to strive toward a better Japan. In pursuing its sound development, I ardently hope that Japan will be able to go forward in the world as a stable, peaceful, and sound nation, in mutual support not only with neighboring countries but with as many of the world’s countries as possible.

Question 2
This summer, Your Majesties were presented with Showa Tenno Jitsuroku, the official account of Emperor Showa’s life, which the Imperial Household Agency took more than 24 years to compile and edit. Would You tell us Your impressions of the annals, as well as some of Your memories of Emperor Showa and if You have anything You are emulating Emperor Showa as an Emperor?

Answer 2
Showa Tenno Jitsuroku, the annals of Emperor Showa, was compiled from numerous sources under the leadership of the Archives and Mausolea Department of the Imperial Household Agency, and I can only imagine the immensity of the hard work that went into its completion. I am deeply grateful for the efforts made by all those involved. I know that I will be going through the pages of the books from time to time, reading about the accomplishments of Emperor Showa. Doing so will serve as a reminder and help me cherish anew the memory of Emperor Showa, who lived through an era fraught with difficulties.

I have various memories with Emperor Showa, but in particular, I fondly recall the times when I was staying at the annex villa at Nasu in the summer and I would visit Emperor Showa and Empress Kojun at the Imperial Villa, or accompany Emperor Showa on his walks to observe some plants in their natural habitats. In the annals, there is an entry regarding the summer after my marriage that reads, “[Emperor Showa] rode in the same car with Empress Kojun and the Crown Princess [the current Empress], to Hiroyaji outside the estate of the villa, where together they observed the sagi-so, Pecteilis radiate, and other plants of the swamp.”

At the time, I was away from Nasu, attending an event in another part of the country. I think that Emperor Showa invited Michiko, who had stayed on in Nasu to take care of the newborn Prince Hiro, to join Empress Kojun and himself on a stroll so that she would not feel lonely. Later, when the Empress and I accompanied Emperor Showa to Meguriya outside the estate of the villa, I think, Emperor Showa told the then Crown Princess, the current Empress, about the hitsuji-gusa Nymphaea tetragona, a wild white flower of the water lily genus. Because of these two precious memories, the sagi-so and hitsuji-gusa came to have a special meaning for the Empress ever since, and when we were blessed with a baby girl much later, on the day that we named her Sayako, we chose the hitsuji-gusa for our daughter’s emblem. I fondly remember how happy Emperor Showa was to hear about this, saying, “Very good.”

Luncheon for the Cabinet 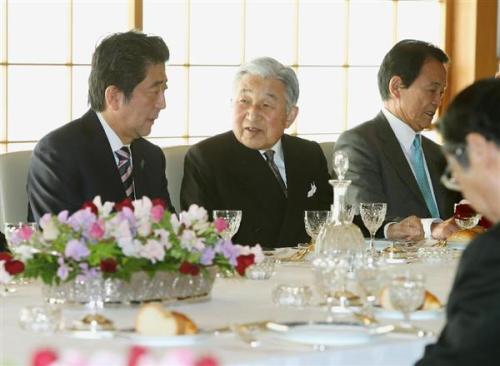 On 19th December, HIM Emperor Akihito held the anuual luncheon for the ministers and the vice ministers of Abe Cabinet at Imperial Palace.
HIH Crown Prince Naruhito also attended the luncheon. 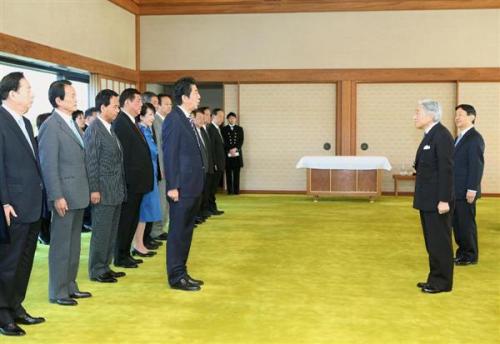 Their Majesties will visit Palau next April to console the souls of war dead in Palau commemorating the 70th anniversary of the end of World War II.

On 17th December, HIH Princess Mako of Akishino came back to Japan from United Kingdom.